A4A: Crank It Out Detailed Review, and Should Authors Do This?

A4A: Crank It Out Detailed Review, and Should Authors Do This?

I have debated and debated how best to address this issue that I have been struggling with and it really came to a head after attempting to read Crank it Out: The Surefire Way to Become a Super Productive Writer??by C.S. Lakin. 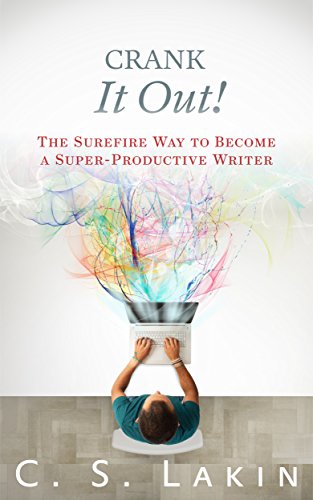 I want to preface this with stating that I am actually a huge fan of C.S. Lakin. I have been following her blog for writers, Live Write, Thrive??for over a year now. She provides a ton of great advice (especially for new writers) and I find it a great tool for refreshers and to reference for fellow author friends.

I was really excited when I heard she was releasing a book called Crank it Out, geared around a hot button topic for a lot of authors right now, the “need” to publish more books, more quickly, in an effort to make a living.

I KNOW that we can make a living. I see indie authors in the 20Booksto50K ??Facebook group reporting it ALL the time, but I’m not there. I tried updating covers, based on recommendations to that effect. I tried marketing strategies, I tried advertising, I have tried A LOT. ??

The old adage used to be that it took 5 books before an author was able to build enough of a fan base to make it. But at 8 books, as of this article, I’m still not making enough money to cover my bills. If I let up on marketing every single book even a little bit, my sales plummet. (Like, I can go months without a sale on books. It’s brutal.)

The hot advice out now is to publish more often. So, I’ve been trying to figure that whole process out. How do I write more, edit more, afford more covers, promote more, and make more money?

Hence, Crank it Out, and my excitement to read it. But I couldn’t even finish the book. Why? Because, even though she makes a big deal about creating quality books, this book felt like she just vomited words onto the page. Offering most of the same advice seen in every life hack, tip, trick, and Motivational Speaker I’ve seen in the last couple of years, and just adding “to be a great writer” instead of entrepreneur. The structure was lacking, there was a lot of repetition, the chapters felt disorganized and cluttered, and I didn’t get anything new. I gave up reading it once I hit the 80% mark.

Perhaps I am suffering a bit of cognitive dissonance, but I feel like I am hearing the same advice that was thrown out to bloggers about five years ago. “Content is King, you need to produce more content!” and then the market got flooded with crappy content (and is still being flooded with crappy content, TBH) and more content is being produced in a day, than the world could even consume. (Yup, I know, very few people will probably even read this blog post.)

And that has been going on with books for awhile now. According to the latest Bowker Report (September 7, 2016), more than 700,000 books were self-published in the U.S. in 2015, which is an incredible increase of 375% since 2010. Whereas 2.71 billion in units were sold, according to the Association of American Publishers (AAP)??Mind you, those billion units sold, include books published since the dawn of time, not just the units published in 2015.

I’m not sure if these figures are only tracking traditional publishing, ISBNs, or all books (including the millions only published on KDP, or using free ISBNs offered from direct publishing outlets like Smashwords and Draft2Digital) But any way that you slice it, the overall sales did not grow, even though the number of books published did grow by leaps and bounds! And the new advice to produce more books for that market of limited readers, I fear, will lead to an ever increasing supply to a dwindling demand.

As more and more authors rush to produce faster, the quality will drop. I’ve already gotten reports from readers that quality is dropping. As a reader myself, I am seeing it. (And not just in indie books. Traditional is taking a hit with the mad rush as well.)

A thorough search doesn’t show where Amazon has reported the number of readers using KU, however, I’ve heard from several readers that they are cancelling because the books aren’t good, there are too many errors (Amazon has made strident efforts to change this, with removing user-reported books from the program) and the cost isn’t worth it as they cannot consume enough books to justify the $9.99 a month.

On the author end, so many authors have jumped on the bandwagon that those who were once making a decent living through KU are now struggling. Many authors who see a bump in reads thanks to promotion, are getting their accounts shut down and books removed, and have to jump through horrendous hoops to get their rights re-instated.

That will only get worse as more authors pump out more books, flooding the market.

So what is the point of this incredibly long post? To be honest, I am sharing the many things flying through my mind, and through the minds of many other authors that I know.

I will admit that I don’t know what I’m doing any more than anyone else does. However, in my gut I don’t feel that the right answer is to throw out more books at a rapid pace, as there isn’t enough demand as is.

I have taken a hard look at my publishing plans and schedule, what I need to do to build up my audience base, and to sell more books.

I chased the idea of publishing more books more quickly, but I feel like all that does is spread my writing too thin. When someone in the 20 Books group asked for those members with more than 20 books on the market, who weren’t making $50K to raise their hand, I was devastated by the overwhelming number who chimed in, confirming my gut instinct.

I have decided that none of that will help me get to my goal. I don’t want to be a flash in the pan, a hack writer chasing the hot thing at that moment, or a NYT Bestseller because I bought thousands of copies myself.

Stephen King talked about selling books out of the trunk of his car when he first started. I’m going back to that. I’m going to focus on pressing the flesh and meeting the readers, engaging, and promoting. 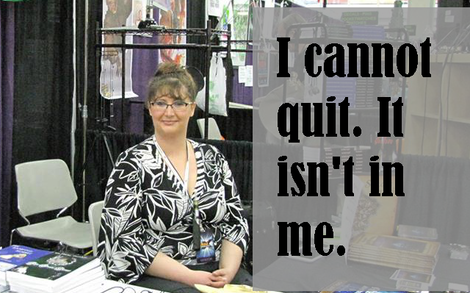 And for the writing side of it, I will wait until it’s the best that I can produce. I will focus on telling the??story in my heart, not chasing the story that I hope will sell. Will this make me money? I don’t know. I was pursuing this approach for nearly three of the seven years that I’ve been publishing, and was losing money at every turn.

But I know that I can’t stop writing. I also know that I don’t just write for my personal pleasure. I want the world to read. I have to find the way for the world to see me, to know me, for me to stand out in the ever growing crowd of authors who are searching for the same thing.

Will this get me where I want to go? I don’t know. But the one thing I do know is that I cannot give up. I cannot quit. It isn’t in me.

This article was originally published on Angell???s 4 Authors,??with permission for re-print from the author.

Heidi Angell Heidi Angell is a bibliophile, lexicomaniac and wordsmith. She is the author of The Hunters Series, The Clear Angel Chronicles, and The Hell School Series. She also created Royal Prince Vince, and Creative Exercises to Inspire. When she is not reading and writing, she can be found spending quality time with her lovely family camping, hiking, swimming, or watching movies.
Posts You might like

How to Choose Your Genre to Find Your Audience

How to Write Good Critique

The Art of the Blurb

What to Check Before You Hit Submit

The Art of the Query Letter

How to Write a Query Letter to Catch an Agent

Breaking Down the Synopsis